Two veteran gay campaigners spoke last night to a packed meeting organised by CAGS (Croydon Area Gay Society). Ray Gosling, the well-known television and radio presenter, was accompanied by Allan Horsfall, life president of CHE (Campaign for Homosexual Equality). Both have been campaigning for gay equality since before sex between men was partially legalised in 1967. 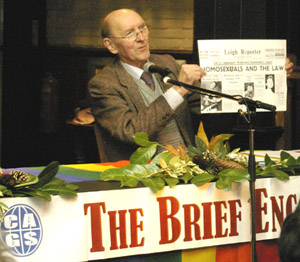 Allan Horsfall spoke about the late 1950s and early 60s. He was a Labour councillor, but found that the party quietly thwarted every attempt he made to discuss decriminalising homosexuality (the other parties were no better). He would have left it there, except that the police prosecuted nine men in Bolton, for trivial misdemeanours which attracted national headlines and prison sentences. After the trial, letters to the local press condemned the prosecution and its outcome, and the editor let on, to Allan, that the police had been worried that public opinion didn’t support their actions.

At that time the London-based Homosexual Law Reform Committee was extremely cautious, and had no openly gay supporters. So in October 1964 Allan got permission to use Church House in Manchester for a well publicised public meeting, and launched a group in the North West, which eventually became the Campaign for Homosexual Equality.

It was widely asserted that the public would not accept decriminalisation – particularly in mining communities, like Allan’s home town. Allan’s home address and campaigning became well known, yet he actually experienced no resistance or harassment, other than a little muttering in the local pub. He admitted to the audience that he might have backed off otherwise. The newspapers told people what to think, but society generally, the Church, and Allan’s mining constituency, were much more open-minded about homosexuality. 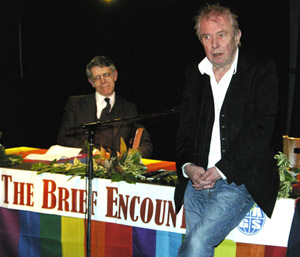 Ray Gosling, journalist and broadcaster, spoke about Gay Monitor, a project that he and Allan have been running since 1996. Together they have worked on prosecutions of dozens of gay men, and find that the system continues to treat gay men more harshly than heterosexuals, particularly where child abuse is suggested or falsely alleged. The system works so far in favour of the alleged victim that elementary questions that would have stopped the whole inquiry are not asked.

In one instance, a minicab driver was alleged to have touched the thigh of a teenage boy. When the case finally reached the Crown Court, the hearing was delayed while the prosecuting counsel, at Ray’s suggestion, established that there was no complaint to answer from the teenager, his mother, his father, the boy’s step-father who had raised the issue, nor anyone else. The minicab driver’s life had been ruined, his health broken, and he was told he was free to go.

Ray and Allan have investigated may other instances, in many of which the defendant had been imprisoned or given up fighting their case, even when the allegations were false and made many years after the alleged incident, in the hope of compensation. Ray argued that the problem is systemic; one solution would be a carefully worded statute of limitation, as in other countries, so that allegations of trivial misdemeanours would have to be brought within a certain timescale, for instance ten years after the alleged victim’s age of majority. However, allegations of paedophilia are so sensitive today that only Gay Monitor and three other small organisations were prepared to campaign on the issue.

This evening’s event was the second in CAGS’ bi-monthly series called “The Brief Encounter” at The Brief in George Street, Croydon, which started in October with a talk by Brian Paddick, former top police officer, London mayoral candidate, and participant in “I’m a celebrity get me out of here”. David Page, Chair of CAGS, said “Once again we’ve had an excellent meeting, with inspiring speakers who epitomise 40 years of gay campaigning. We were delighted to see so many people in the audience, some of whom came long distances to hear Allan and Ray’s talk.”

More details can be found on the CAGS website at www.cags.org.uk. There’s more about Allan and Ray’s work at www.gaymonitor.co.uk.

This press release is also available at www.cags.org.uk/pressrel-2008-05.htm.