Today, with many of the original aims of CHE achieved, at least in this country, we're predominantly a social group, but we do still campaign on both local and national issues from time to time.

Changes to the Equality Act

In August 2012, CAGS put forward a submission regarding proposed changes to the Equality Act, and also encouraged its members to respond individually.

See the text of our response on  the enforcement provisions and on third party harassment.

In 2012, the Government instituted a consultation on extending civil marriage to same-sex couples. CAGS, in conjunction with CHE (Campaign for Homosexual Equality), issued guidance notes for its members: note telling them how to answer, but giving some points to think about.

You can also view CAGS's own submission to the consultation.

For the background to the equal marriage issue, see the "marriage equality" page on the LGBT UK History Wiki.

IDAHO (the International Day Against Homophobia and Transphobia) is celebrated on 17th May each year. For IDAHO 2012, CAGS held two successful events. 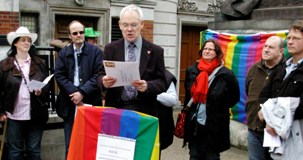 In the morning Ray Harvey-Amer gave an oration congratulating the Queen on her Jubilee, looking back to Queen Victoria’s reign (we’d adorned the base of her statue with rainbow flags) and highlighting the 40 Commonwealth Countries that still criminalise gay sex; Ross Burgess (pictured) read out and then posted a letter to the Queen; and Croydon Community Choir led us in the singing.

In the evening we held a panel debate on the issues raised by the Home Office consultation on equal marriage at the Unitarian Church, skilfully chaired by Rev Art Lester.

See our press release for more details about both events, with more pictures.

You can also download the programme for the morning's event, and the letter to the Queen.

>Early on Sunday morning, 4th December,2011, two gay men were removed from Shooshh nightclub on Crown Hill, Croydon, in what was reported in the press as possible anti-gay discrimination. CAGS has now spoken at length to one of the two gay men involved. He insists that he loves Shooshh and goes there every Saturday night: it's his favourite venue, very welcoming and the place he feels comfortable. He strongly rejects any sug­ges­tion that the incident was homo­phobic. CAGS is pleased that the matter has been clarified so effectively. 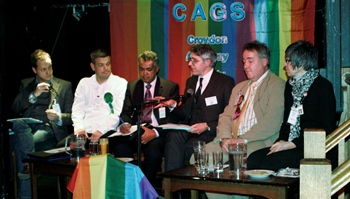 CAGS, in conjunction with CHE, organised a campaign of writing to General Election candidates in Croydon and surrounding areas, to ask their views about matters of concern to LGBT people.

In advance of the meeting, we had allocated one of our regular Brief Encounter meetings to a "Hustings session", with representatives of the main political parties.

No Homophobia in the Legal Profession! 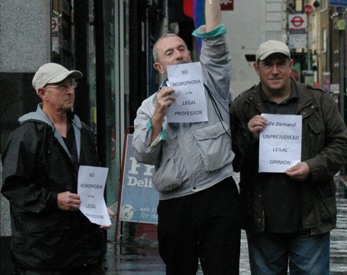 In July 2009, a local solicitor, David Moore, of Streeter Marshall, protested that the Law Society was urging law firms to support Pride. His e-mail, leaked to the press, complained that the society was being "hijacked by the gays", and most people wanted to bring up their children "as nature intended". CAGS members staged a protest outside the Streeter Marshall office and handed in a letter of complaint. Subsequently Mr Moore stated that his firm was not homophobic, and he would have expressed himself differently had he thought the e-mail would be leaked.

In 2006 we sent a letter of support to the Gay Police Association, who were under some pressure having advertised the marked rise in incidents against gay people where the main motivation was religious.

In the early years of this century there was growing concern about rap artists whose lyrics advocate the beating, burning and murder of gay people. In 2003 we wrote to Croydon Police, and via them to the Metropolitan Police Force, asking that the Met should warn those who sell and distribute these lyrics that they may face prosecution for incitement to murder or conspiracy to incitement if they continue. Read our letter on this.

(In the event, a major international campaign, coordinated largely by Outrage! mounted successful protests and the venues where the offending artists were playing. This resulted in being able to negotiate with the distributors of their music to cease promoting the specific songs which promoted the killing of gay people. Although this campaign was successful it is maintained through constant vigilance and immediate action on the occasions when the agreement is broken. We understand that legislation is being actively proposed to make it an offence to incite the murder of gay people, in the same way that other social groups are protected.)

IN 2003/4 we campaigned very extensively on Civil Partnerships, particularly demonstrating that Christians have a long tradition of blessing same-sex partnerships, and many wish to preserve this as a traditional part of the Christian teaching and their right to do so should be respected. We sent hundreds of letters to members of the House of Lords, on several different aspects of the Bill.

Read CAGS' submission on the Department of Trade and Industry's consultation document on Civil Partnerships.

Equality in Goods and Services

In June 2005 CAGS sent its submission to the DTI on the forthcoming Regulations on Equality in Goods and Services.

CAGS signed up to an initiative from SLAGO, to write to thank chief constables for allowing police officers to march in the Pride parade, in uniform. In the event several Christian organisations signed up to this, so CAGS was not quoted directly.

France did not accept civil partnerships, so couples who moved to France or worked there found unexpectedly that they had lost the rights and security of civil partnership, and were nonetheless not eligible to dissolve their civil partnership in order to enter a "PACS" under French law. The Written Declaration addressed the problem of countries in Europe not recognising such relationships.

In August 2006 we urged our MPs to sign the Early Day Motion protesting about the execution of minors and the persecution of gays in Iraq.

Commission on Equality and Human Rights

In July 2006 CAGS sent its submission to the DTI on the proposals for the forthcoming Commissions on Equality and Human Rights.

Our submission on the Gender Recognition Bill (allowing transsexuals to have their acquired sex recognised in law and recorded on their birth certificates) addressed the point that a married person wishing to have their acquired sex legally recognised will have to annul their marriage. We considered this was unacceptable to the many people whose partners have stood by them through extremely difficult times — not to mention those who took their marriage vows seriously and fully intend that they should last for life.

We made a submission to the Government in January 2003 on the Equal Employment Regulations. After the Consultation process was over, Downing Street had further consultations with certain bishops and clergy. This resulted in changes to the wording of the clauses that prevented people being sacked (or employed) by religious bodies, on the ground of sexual orientation. We made urgent representations to the scrutiny committee, which ultimately recommended that these changes be rejected by Parliament. However, ministers clarified the meaning of these clauses before both houses of parliament, establishing that the exceptions were every bit as narrow as they had been. This has however not prevented vulnerable people being sacked, and the attempt of the trade union Amicus to get a court judgement to recognise this explicitly has resulted in no further clarification.