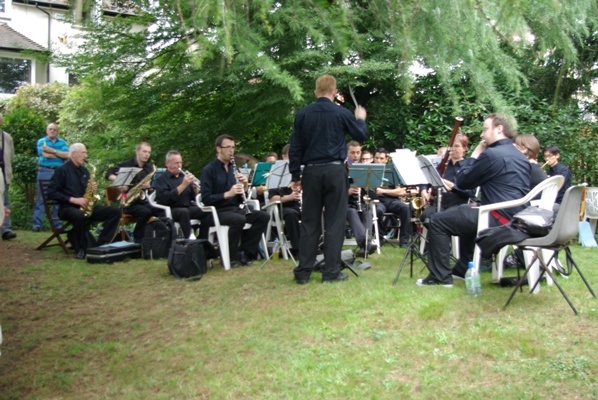 Croydon Area Gay Society (CAGS) held its annual garden party ("Mardi on the Grass") in Purley last Sunday (22nd August). The event, organised in conjunction with the Surrey and London Association of Gay Organisations (SLAGO), was open to members of the lesbian, gay, bisexual and transgender (LGBT) community of Croydon and South London, and an estimated 60 guests turned up.

Highlight of the party this year was music by the London Gay Symphonic Winds. Later Brian Parker, Chair of SLAGO, presented the SLAGO Cup; the cup went this year to Clapham-based South London Gays (SLG) who had come top in the 2009-2010 programme of inter-group contests. This was followed by an "open mike" session, in which several members sang or recited, to great acclaim from the audience.

Ross Burgess, one of the organisers of the party, said "I've been told this year's garden party was the best ever, but it couldn't have been a success without the support of lots of CAGS members, who provided food, lent chairs and cutlery, took money on the door, and helped in other ways. We were particularly delighted to be able to book the London Gay Symphonic Winds; their brand of light music was just right for the occasion."