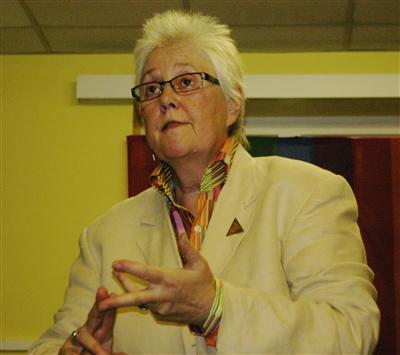 Croydon Area Gay Society (CAGS) had to re-schedule its bi-monthly meeting on Tuesday 4th October, as its usual venue, The Brief in George Street, had unexpectedly closed down. Quick action by committee members saved the day, and the meeting, addressed by outspoken lesbian activist Sue Sanders, was held successfully in the Friends Meeting House, Park Lane. Members were notifified by e-mail, a notice was put up on the CAGS website at www.cags.org.uk, and a committee member was stationed outside the boarded-up pub to direct people to the new venue.

Sue Sanders took as her theme the intriguing title "What has homophobia done for us". She explained that when people are on the receiving end of  homophobia, as with any powerful form of prejudice, one result can be to spur them into action to overcome it. The word "homophobia" probably didn't exist before about 1969, but having the word has concentrated people's efforts against it: "If it's not labelled it doesn't exist"

Sue said that the progress of lesbian and gay rights in this country had been very slow, starting from the Wolfenden Report as far back as 1957 which recommended the decriminalisation of male homosexuality. There was a big setback in 1988 when "Section 28", made it illegal for local authorities to "promote homosexuality". Section 28 was not just vague homophobia, it was an arrow of prejudice, and people found surprising and creative ways of dealing with it,  for instance lesbians painting a bus pink, or abseiling into the House of Lords. "We lost that battle [Section 28 was passed, and was not repealed until 2003], but people's actions then began the process of winning the war." Sue Sanders' own contribution to winning the war notably included setting up LGBT History Month in 2005.

In 1999 the Stephen Lawrence report found that the Metropolitan Police were "institutionally racist". Since then, all members of the criminal justice system are required to have equality and diversity training, covering not just racism, but homophobia. sexism, and other forms of prejudice. But there's a need for a similar national scheme covering teachers: prejudice and discrimination start in the classroom, and many teachers have been asking to be trained in this area.

Sue maintained that all forms of prejudice, against women, black people, gay or trans people or the disabled, go together. The 1999 pub bombings, culminating in the attack on the Admiral Duncan pub in Soho, reinforcd the point that a person who is homophobic is often racist. She added "We wouldn't have homophobia if it wasn't for sexism".

David Page, Chair of CAGS, said "Sue cleverly balanced the successes LGBT people have achieved in the last forty years with what still needs to be done, in her stimulating speech. And it was great having representatives from The Bridge youth club in the audience taking an important part in the discussion which followed Sue's talk."

CAGS' meetings, marketed as "The Brief Encounter", held on alternate months at The Brief since October 2008, have featured a wide range of interesting and entertaining speakers. It is planned to continue the series, but the CAGS Committee will be reviewing where to hold the meetings from December onwards.

The photograph shows Sue Sanders speaking at the meeting.

This press release is also available at www.cags.org.uk/pressrel-2011-08.htm.