Sue Sanders, one of the UK’s leading LGBT (lesbian, gay, bisexual and transgender) activists, will be speaking at The Brief (48 George Street, Croydon) at 8pm on Tuesday the 4th of October. [Please note: meeting now moved to The Friends Meeting House, 60 Park Lane, Croydon CR0 1JE]. The talk, organised by Croydon Area Gay Society (CAGS), will have the intriguing subject “What has homophobia done for us?” and is free of charge and open to all. It's one of CAGS' open meetings under the general title of "The Brief Encounter". 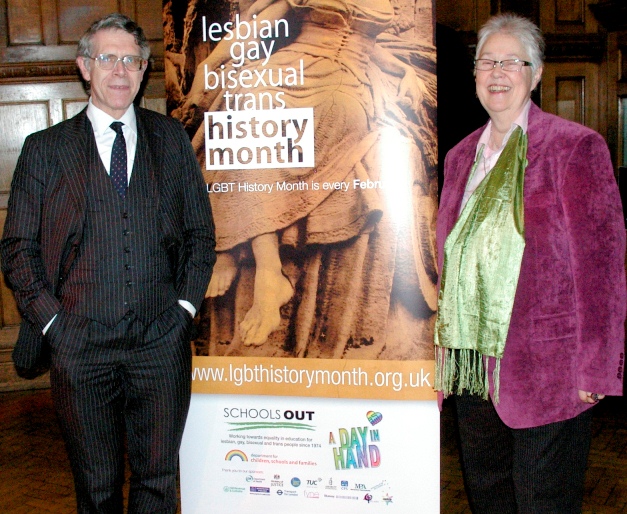 Sue Sanders has specialised in challenging oppression in the public and voluntary sectors for over 30 years. She regularly appears on TV and radio, and has been a keynote speaker and workshop leader in conferences on diversity, homophobia, and LGBT issues.

Sue was one of the founders of Schools OUT and instigated LGBT History Month, which is now celebrated in February every year. She has won awards for her work, including the first ever Derek Oyston Achievement Award, presented by CHE (the Campaign for Homosexual Equality).

In 2000 Sue Sanders and her partner Jeane carried out a study on homophobic violence and same-sex domestic violence in Croydon. In 2007–8 Sue conducted the Aurora School Bullying Project, working with staff in schools in Croydon to combat bullying (with a special expertise on homophobic bullying).

In February this year she came to Croydon's civic reception for LGBT History Month at the Braithwaite Hall.

Sue Sanders is a member of the LGBT Advisory Group to the Metropolitan Police, an independent advisor to the London Criminal Justice Board, vice-chair of the Southwark Anti–homophobic Forum, and a consultant to the Crown Prosecution Service.

Sue Sanders has directed many plays in London's fringe theatres and has been involved in the production of radio programmes for ABC in Sydney; she’s also written poetry and short stories.

This press release is also available at www.cags.org.uk/pressrel-2011-07.htm.