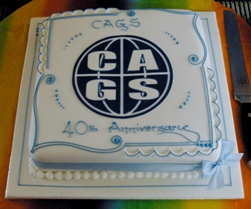 Croydon Area Gay Society (CAGS) held a party last Saturday afternoon (14th May) to celebrate its 40th anniversary. About 60 members and friends enjoyed the event at the Bird in Hand, Sydenham Road.

CAGS was founded in 1971, as "London Group Seven" of the Campaign for Homosexual Equality (CHE) but was always based in the Croydon area. It became an independent society when CHE nationally took the decision to concentrate on national campaigning and shed its local groups. 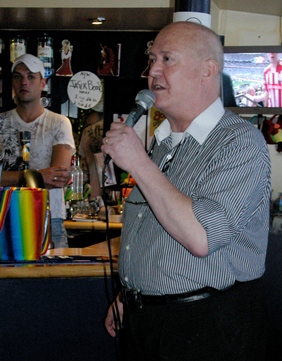 The afternoon started with several members contributing reminiscences about various aspects of the history of CAGS and of gay life in Croydon, including the ACE Centre project for people with AIDS, buddying for AIDS sufferers, and the early days of the CAGS Tennis Group.

The raffle raised over £100 for CAGS funds, and the celebration cake was cut jointly by Andy, the founder of the group in 1971, and Mark, the newest member. There was plenty to eat, and the evening concluded wfile:///C:/Users/che/Documents/My%20Web%20Sites/cags.org.uk/press-release-8Oct08.htmith entertainment by several CAGS members, plus Peter Scott-Presland (pictured), the well-known gay cabaret artiste and writer.

Earlier in the week, CAGS had held its 40th Annual General Meeting. David Page, Chair of CAGS, thanked all those who had contributed to a successful year. He added "A big, big thank you to all those CAGS members who host events throughout the year, without whose generous assistance in opening up their homes CAGS would cease to exist."

This press release is also available at www.cags.org.uk/pressrel-2011-03.htm.