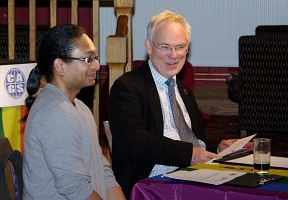 The HarbourSafe project, the only one of its kind in the country, is based in the Greenwich/Woolwich area and aimed at black and minority ethnic (BME) men who have sex with other men, and find it difficult to practice safer sex. Each client is assigned to a mentor who has been chosen to be similar in background, so that mentor and client can discuss the issues on a basis of shared personal experience.

Each client meets with his mentor regularly over a six-month period, during which they tackle issues such as setting goals, low self-esteem, and the many reasons men may have for not using condoms. Rory trains, monitors, and supports the carefully selected mentors, who are required to observe strict confidentiality.

Rory's project has been running since 2006, and has been extremely successful: out of 100 clients mentored, only one has gone on to become HIV positive. Funding for the project, run by the Metro Centre, Greenwich, runs out at the end of this year, and its future is uncertain.

Answering questions from the audience, Rory said there were many reasons why people were reluctant to practice safer sex, including machismo, low self-esteem (I don't look after myself, I don't matter to anyone), the idea that "using condoms identifies me as gay", or the thought that HIV can now be managed using anti-AIDS drug therapies. By exploring these issues with someone they can relate to, clients can be helped to realise the importance of taking responsibiility for safer sex, and encouraged to have a positive attitude and self-identity.

Following a break for people to re-charge their glasses, the discussion ranged over many other aspects, including ways of advertising the project to such a hard-to-reach client group, the influence of churches, and problems of forced marriage. Rory commented that he had given talks to many other audiences, from groups of health professionals to customers at a gay sauna, but the CAGS audience was the friendliest he had come across.

The photograph shows Rory Goring (left) with Ross Burgess who chaired the meeting.

This press release is also available at www.cags.org.uk/pressrel-2011-02.htm.