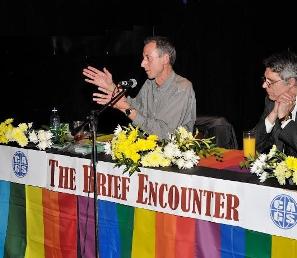 Peter Tatchell, a Green Party supporter, was taking time out from a hectic European election campaign. Much of his talk was on the theme of the unfinished battle for LGBT rights. Huge progress has been made: in less than ten years, every major discrimination against gay people has been removed, bar one. It was difficult to think of any area in which such progress had been achieved in such a short space of time. But LGBT people have still not achieved full equality

The battle for gay rights began in the 1950s with a few courageous campaigners, who laid the foundations for what has happened since. The Gay Liberation Front (GLF), which Peter had taken an active part in, didn’t manage to change society, but did achieve a revolution in LGBT consciousness, by demanding full and equal acceptance of gay people on the grounds that they were human beings and by promoting the revolutionary slogan “Gay is good”.

In the 1980s and 90s patient quiet lobbying for gay rights was not working. The police, for instance, would meet with gay campaigners, give them coffee and biscuits and listen politely, and still continue applying the law in a discriminatory way. Peter’s group “Outrage” turned to direct action instead. They discovered that Surrey police had built a hide so that they could observe gay people late at night in an open space (while ignoring heterosexual couples who were blatantly having sex in nearby public places in daylight). Outrage! members smashed up the hide, and left a banner saying “Police provocateurs fuck off.”

The most important advances for LGBT people had come during the post-1997 Labour government, and would almost certainly not have happened under a Conservative government. But it was pressure from Europe that had brought the reforms about, and the government had spent public money opposing some of them.

Despite the recent advances, full equality has still not been achieved. Civil partnerships are a major advance, but they’re not marriage, and therefore not full equality: they represent a form of sexual apartheid; the law should apply to everyone equally. The Labour government is also colluding with the appalling treatment of LGBT asylum seekers. And there’s still a total ban, supported even by some (government funded) gay charities, but opposed by the National AIDS Trust, on gay men donating blood.

Much of the opposition to LGBT equality has come from religious fundamentalists, but some religious leaders, for instance Archbishop Desmond Tutu, have been very strong supporters of gay rights.

Peter said that the Queen has never treated LGBT people equally. To the best of his knowledge, she has never uttered the words “lesbian”, “gay”, or “transgender”, even when announcing LGBT legislation, and she failed to send condolences to the victims of the Admiral Duncan bombing. In royal visits she meets countless minority groups and charities but never those that serve LGBT people.

In discussion, Peter was asked about his “outing” of ten bishops in 1994. He replied that the bishops had been hypocritical, by voting against gay equality in the House of Lords: “They were so arrogant, they didn’t believe we would dare do it.” So Outrage! confronted them with banners inviting named bishops to “Tell the truth!” Following the outing, none of the bishops have ever again opposed gay rights, and a couple of them have been very helpful. The House of Bishops has been strong in its condemnation of homophobia.

Peter was asked about his recent visit to Russia, where he and others were arrested at Moscow Pride. He said that the Russian gay activists are incredibly inspiring; their actions generated masses of publicity in Russia, and public opinion, at least among younger people, is starting to turn in their favour. After the event, the Russian activists have fared better than those from Belarus (the last old-style dictatorship in Europe) some of whom have had to take refuge in Russia.

At the end of the meeting, Peter received warm and unexpected thanks for being a courageous and inspiring activist and a much-needed role model for young LGBT people.

CAGS – www.cags.org.uk – is a long-established social and support group for gay men and lesbians in and around Croydon. There’s more about The Brief Encounter at www.cags.org.uk/brief.shtml. For the Peter Tatchell Human Rights Fund, which supports Peter’s campaigning activities, see http://www.tatchellrightsfund.org.