Croydon's celebrations for Black History Month 2010 featured a talk by Linda Bellos OBE, the black lesbian activist who had originated Black History Month in the UK in 1987. She was speaking on the 5th of October at The Brief in George Street, at a meeting organised by Croydon Area Gay Society (CAGS), as part of Croydon Council's "Celebrating Black History" programme.

On the previous day a reception in Croydon Clocktower had included speeches by Rev Jide Macaulay and the photographer Sonalle, whose touring exhibition "Ethnic Minorities Coming Out" was on view for a short season in the Clocktower's Space C gallery. In her forceful and combative talk, Linda Bellos explained that Black History Month had been created, originally in London, to highlight the fact that black people are part of British history; the term "black" was intended to cover all those being discriminated against because of their skin colour, from whatever part of the world they originated. Since then Black History Month had expanded nationwide, although some of the events seemed to have little to do with history.

There was a lively discussion about same-sex marriage. Several members of the audience thought it was time that marriage should be extended to gay and lesbian couples as in other countries. Linda Bellos, speaking as a feminist who had once been married, said she was not much in favour of marriage as an institution, but she was very proud that she and Caroline were the first couple in their borough to form a civil partnership, which is equivalent to marriage in all but name. Meanwhile it was quite wrong that transsexual people seeking an official change of gender are obliged to have their marriage dissolved.

Linda Bellos said her company, Diversity Solutions Limited, had advised the Office of National Statistics about counting the numbers of gay and lesbian people in the UK, but the advice had been ignored, and the recent published figures were much lower than they should have been. "Unless you train people properly in how to conduct a survey in such a sensitive area, you'll get the wrong answer".

Black History events in Croydon continue throughout October. On Tuesday the 12th there will be a showing of the film Beyond Labels, directed by Jaime Sylla, about black gay men in London, and on Thursday the 28th Croydon Library is launching a lesbian, gay, bisexual and transgender reading group, starting with Giovanni's Room by James Baldwin, the celebrated black gay author. 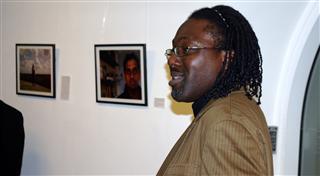 At the reception on Monday, Sonalle described visiting and photographing black and minority ethnic people who had come out to friends and family as gay or lesbian. Some people had found this easier than expected, while others had had very bad experiences. Rev Jide Macaulay described how his own father, a noted theologian, had disowned him when he came out, and he had been forced to leave Nigeria where he had set up a gay-friendly church, the House of Rainbow.

For full details of all these events see the www.lgbtcroydon.org.uk/blackhm.htm.

This press release is also available online at www.cags.org.uk/press-release-2010-13.htm.